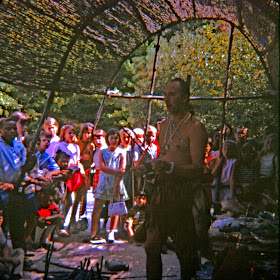 Although within some Thalians’ memories, others may not know that our community was once host to an historic and entertaining museum that honored and displayed the ways of the American Indian. The site of the Skicoak Living Museum of the American Indian was west of Thalia Creek, across from Pembroke Mall.
The museum, affiliated with the Foundation of North American Indians, was the brainchild of founder and director Leslie “Douglas” Waldorf  (1927-2007). He developed the show-and-tell facility on the acreage adjacent to his home. Skicoak Living Museum opened its doors, or perhaps more accurately, its teepee flaps- in 1965.  The entry road was dubbed “The Lane” by the residents of the three houses along the dirt road. Children referred to it as “The Time Tunnel” alluding to their magical venture back to the days of the past.
Waldorf was a man of many trades, having worked in radio broadcasting, banking, real estate, television, and motel management. He had gained local notoriety in the 1940s and 1950s as “Wally Douglas,” an area radio and television personality, as well as a stand-up bass player and drummer. His interests in history and archeology greatly influenced his extracurricular activities, including involvement in various organizations and societies to the benefit of many. Putting his knowledge of Native Americans to use, Waldorf, under the name of “Chief Thundercloud,” had been in charge of the Indian exhibit at Frontier City. Frontier City was an American West historic theme park that operated from 1960 through 1964 at its location between Birdneck and Laskin Roads. When Frontier City closed, Waldorf easily segued into his “living museum” role, bringing with him not only public recognition as an “Indian,” but also, conveniently, some of the park’s costumes and props.
Waldorf prided himself in his thirty-five years of service to youth organizations including school children, Boy Scouts and Campfire Girls, by sharing his knowledge, time and talents. It was Thalia Elementary School’s fourth grade students’ enthusiastic response to his American Indians presentation that prompted his inspiration to develop his living museum adjacent to his family’s home. In the name of authenticity and in keeping with Waldorf’s passion for the history and lifestyle of American Indians, the entire family, wife Olive and the six children, took on many indigenous ways of life, including planting and harvesting their own crops for food, preparing food as the Indians had, and using deer skin hides as coverlets on their beds.
Waldorf named the museum Skicoak in keeping with local history of the area’s first settlers, the Chesapeake Indians. Skicoak was believed by historians to have been their main tribal village on the Elizabeth River in today’s Norfolk. It was depicted in drawings by John White, English artist, cartographer, and mid-1500s visitor to this area. Skicoak was seemingly gone before the arrival of the English at Jamestown in 1607.  Some believe the village was destroyed at the hands of Powhatan’s people, who resented the Chesapeans for not joining their confederacy.


The Skicoak Living Museum of the American Indian closed in 1971. For more information about the museum, go to http://www.mark422productions.com/SkicoakLivingMuseum.html

Terms and Conditions: All content provided on this blog is for informational purposes only. The owner of this blog makes no representations as to the accuracy or completeness of any information on this site or found by following any link on this site. The owner will not be liable for any errors or omissions in this information nor for the availability of this information. The owner will not be liable for any losses, injuries, or damages from the display or use of this information.  No one may modify, copy, reproduce, or distribute any content in any manner or medium without permission. These terms and conditions of use are subject to change at any time and without notice.