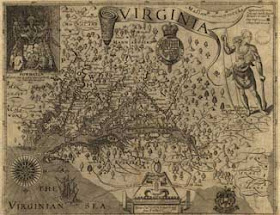 Let’s roll the clock back to the 1600s. To encourage the colonization of Virginia, land patents were being granted through a “headright” system that offered 50 acres of land per person for the financing of another's passage from England. Two of our area’s earliest settlers from England, entrepreneurs Adam Thoroughgood and Lancaster Lovett, were utilizing this system to acquire hundreds to thousands of acres in what is today’s Virginia Beach. Seemingly, Thoroughgood and Lovett were the earliest European landowners in today’s Thalia (which was not so-named yet).

Adam Thoroughgood had married the well-heeled Sarah Offley of London. It has been surmised that he basically used her dowry to embark on his colonial ventures. He did very well for himself, ultimately owning about 7,000 acres of land, much of it being in today’s Bayside. Adam was very active in the early development of the church and community of what was then called Lynnhaven Parish. He died in his mid thirties in 1640, leaving the majority of his land to his wife, Sarah. He left his Thalia land called “Timber Necke,” apparently land west of Thalia Creek, to his only son and namesake.

Lancaster Lovett had been granted the land in Thalia east of the creek. In 1645, he married young Bathsheba as his second wife. The following excerpt from early court records that same year illustrates an unfortunate (for Bathsheba) tiff between the pregnant sixteen-year-old and the aforementioned influential Sarah Thoroughgood Gookin. Sarah, then in her second widowhood as a result of her husband Captain John Gookin's death in 1643, was quite busy in the county court those days. In this instance, Bathsheba was accused of slandering Sarah and her daughters:

15 August 1645 - The difference in controversie betweene Mrs. Gookins Pltf: and Lancaster Lovett deft: concerning Bathsheba the wyfe of the said Lanc: Lovett at the request of Mrs. Gookin is referred to the next Court to be heard and determined .... for as much as it appears that Bathsheba the wyfe of Lanc: Lovett hath much misdemeaned herself towards Mrs. Gookins her Mistress and the Court taking due recognixance thereof doe order that the said Bathsheba shoud aske the said Mrs. Gookins forgiveness in open Court upon her Knees and if it shall appeare that the said Bathsheba shall hereafter misbehave herself in an uncivill or undecent manner worthy of punishment then she the said Bathsheba shall receive 20 lashes on her bare back after she is delivered of her child she nowe goeth withall and pay the Court charges. (A f 21a p 264)

Francis Yeardley married Sarah Thoroughgood Gookin in 1647 to become the twice-widowed woman's third and last husband. He was the youngest son of Sir George Yeardley, who served as Governor of Virginia from 1618-1621 and again from 1626-1627. By 1648 Timber Necke (again, west of Thalia Creek) was “taken up by” Francis Yeardley, most likely courtesy of his having married Sarah.

Sarah outlived all of her spouses. On her epitaph at the Church Point “parish church” graveyard, the thrice-widowed woman Sarah Thoroughgood Gookin Yeardley claimed each husband. But, per her wishes, she was buried with her second spouse, Captain John Gookin. Her marriage to him had been a happy but short, two-year union. Her burial request and will left no doubt that Gookin was her preferred husband.


Terms and Conditions: All content provided on this blog is for informational purposes only. The owner of this blog makes no representations as to the accuracy or completeness of any information on this site or found by following any link on this site. The owner will not be liable for any errors or omissions in this information nor for the availability of this information. The owner will not be liable for any losses, injuries, or damages from the display or use of this information.  No one may modify, copy, reproduce, or distribute any content in any manner or medium without permission. These terms and conditions of use are subject to change at any time and without notice.
niecelaine at 6:58 PM
Share