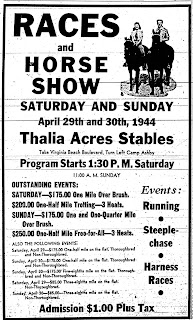 Despite the raging of World War II, Thalia Acres was abuzz with equine activity during the mid 1940s. At the same time that captured Germans were imprisoned at nearby Camp Ashby, the site adjacent to Robert Steinhilber’s property became host to wartime entertainment in the form of horse racing and showing. Steinhilber had purchased his land about a decade previously. While his Thalia Acres Inn restaurant had opened a few years prior to the opening of the racetrack in 1943, the facility was serving as an officer’s club during the war and racing days.

Former longtime Thalia Acre resident Margaret Stroud, whose father was the horse track’s founder, was one of several who shared her memories of Thalia’s racetrack. J. H. Spivey, then president of Princess Anne Saddle Club, had purchased the large tract of land in Thalia Acres from Herman Steinhilber, brother of restaurant-owner Robert. According to Stroud, her father was somewhat of a visionary: it was his goal to keep the Thalia area active until peacetime prosperity lifted wartime building restrictions and it was viable to develop the land. Under the direction of Spivey, a new horse center/trotting track, including boarding stables, was built.

The tracks were approved by the U.S. Trotting Association and the starting gun fired in the fall of 1943. They were off! The horse races provided area residents and servicemen both weekend entertainment and a welcome diversion from the stresses and calamities of the war. Events were held in April and again around November, as state law then prohibited horse racing December 1 through March 31. Typically, a few hundred spectators made the trip to Thalia Acres in Princess Anne County for a day at the races.

Spivey had designed an oval course for the flat races, allowing spectators a view of both the starts and finishes of the heats. Flat and harness races with sulkies became the main events, although show classes, bar jumps, brush races, and “hunter hacks” were also billed (NOTE: According to Wikipedia, “Hunter hack is a type of English pleasure class where exhibitors in Hunt seat tack and attire perform on the flat at a walk, trot, canter and hand gallop, and then jump two low fences”). The track’s racing program eventually encompassed the one mile 2:17 trot and free-for-all paces, three heats each, the half-mile flat race, the five-eighths mile flat race, and the one and a half mile steeplechases. Both thoroughbred and non-thoroughbred events were offered with prizes for winners of the competitions ranging from about $85 to $200.

Applicants were by no means limited to Princess Anne County horse owners: entries came in from the outreaches of Hampton, Suffolk, Nansemond, Chesterfield, Smithfield, Richmond, and King and Queen County. Lin Morris, W. C. “Bud” Powell, and Forrest “Buster” Newhall were among well-known Princess Anne County citizens of those days who proudly raced and showed their horses at “Thalia’s Oval.” Sunrise was Spivey’s own favorite horse. Forrest Newhall, Jr. recalled that Bud Powell raced and showed several of his horses, including his stellar thoroughbred stallion imported from England. 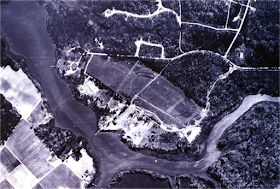 George Albert Reel set out from his dairy farm in Great Bridge to Thalia’s racetrack, the closest to him in those days, to win many a ribbon. Reel’s daughter, Mrs. Coley, shared that her brother-in-law Elwood Bradley had the honors of riding their prize racehorse, Lady Rivers, to the finish lines. Coincidentally or perhaps by some grand design, Mrs. Coley’s grandson was in later years employed as a busboy at Steinhilber’s restaurant adjacent to the racetrack. Cody literally worked on his great grandfather’s stomping- or, shall we say trotting- grounds.

Even locals without registered steeds could join in some of the fun. Bill Onderdonk, for instance, along with other local high school age teens, recalled unofficial “face break” races of subpar farmers’ horses (even mules!) on afternoons at the tracks that included a chicken dinner.

It seems the horse races in Thalia came to an end in 1946. The track's oval is notable in aerial photographs of subsequent years.

Terms and Conditions: All content provided on this blog is for informational purposes only. The owner of this blog makes no representations as to the accuracy or completeness of any information on this site or found by following any link on this site. The owner will not be liable for any errors or omissions in this information nor for the availability of this information. The owner will not be liable for any losses, injuries, or damages from the display or use of this information.  No one may modify, copy, reproduce, or distribute any content in any manner or medium without permission. These terms and conditions of use are subject to change at any time and without notice.